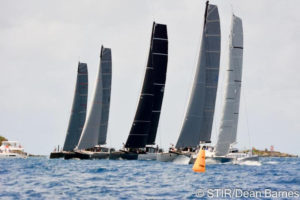 Twenty-three boats took their start this morning on a 21-nautical mile course that circumnavigated the U.S. Virgin Island of St. John counter clockwise in the Round the Rocks Race. This one-day warm-up for the main event St. Thomas International Regatta (STIR), March 24-26, offered a full range of exhilarating sailing challenges from frequent tacks along offshore cays to cross currents and wind shifts around the east end and slalom-like conditions in the downwind. The island’s Virgin Islands National Park served as the picture-perfect backdrop for this incredible and highly competitive course.

“I enjoy any time we’re racing and to win is all the better,” says St. Thomas’ Peter Corr, whose team aboard his King 40, Blitz, finished first in the CSA Spinnaker Racing Class. “We started off across Pillsbury Sound, fought the current and then the winds changed direction and it was tough. The sail up the south side of the island was nice, but then the wind died by the time we got to Coral Bay. After that, we shot around to Francis Bay, enjoying smooth seas although the winds changed direction often. Then, the ride down the north shore was great straight to the finish. We have a lot of experience on the team and it works in our favor.”

“It was a really good race for us today. There were good conditions and we were able to get in the right place at the right time with the currents,” says Evan-Wong, who has finished 9th out of 41 boats in February’s RORC Caribbean 600 and a third place podium finish earlier this month at the St. Maarten Heineken Regatta.

The team aboard the C&C 30, Don’t Panic, didn’t panic at all about not besting the class today.

“We really looked at this as a tune-up for us,” says navigator, John Bonds, Jr., from San Francisco, CA. “The C&C class is growing quickly and very fun. It’s something that we’ve tried to figure out is a big little boat or a little big boat and I think it’s the former. It handles like a bigger keel boat than a larger dinghy, with a nice smooth transition to a plane and then keeps on accelerating.”

“We usually race windward-leewards so it was nice to have the reaches today,” says Enright, who on Wednesday was announced as a member of the U.S. team for the 2017-2018 Volvo Ocean Race.

in CSA Non-Spinnaker Racing, it was St. Thomas’ Steve Schmidt driving his Santa Cruz 70, Hotel California Too, that topped the scoreboard. Schmidt, who had planned to spend the day working on his boat in preparation for STIR, decided to sail the Round the Rocks Race at the encouragement of crew member, Tony Sanpere of St. Croix.

“For a last-minute pick-up crew, with experience that ranged from first time on a boat to very experienced, they all did a wonderful job. Because of that, it was very fun for me,” says Schmidt.

Five large offshore multihulls reveled in the breeze and long reaches that the Round the Rocks Race presented. In the end, it was Fujin, a Bieker 53 owned and helmed by Greg Slyngstad of Sammamish, WA, that won based on the new Multi Rule handicap the class is working to perfect.

“Our first race after launching the boat last year was the Heineken Regatta in St. Maarten. Then, we raced the boat up in Newport and along the East Coast last summer. This year, we raced St. Maarten again and won the class. I’ve never sailed off St. Thomas before and we were glad to do well again today,” says Slyngstad.

Fujin was built by Gold Coast Yachts on St. Croix.

“One of the advantages is that the boat is really light – 13,000 pounds for a boat that big is pretty incredible. That’s just one reason is goes so fast,” says Gold Coast’s Roger Hatfield, who sailed with the Fujin team today.

BLITZ, SPIRIT OF JUNO WIN CLASSES IN ROUND THE ROCKS RACE