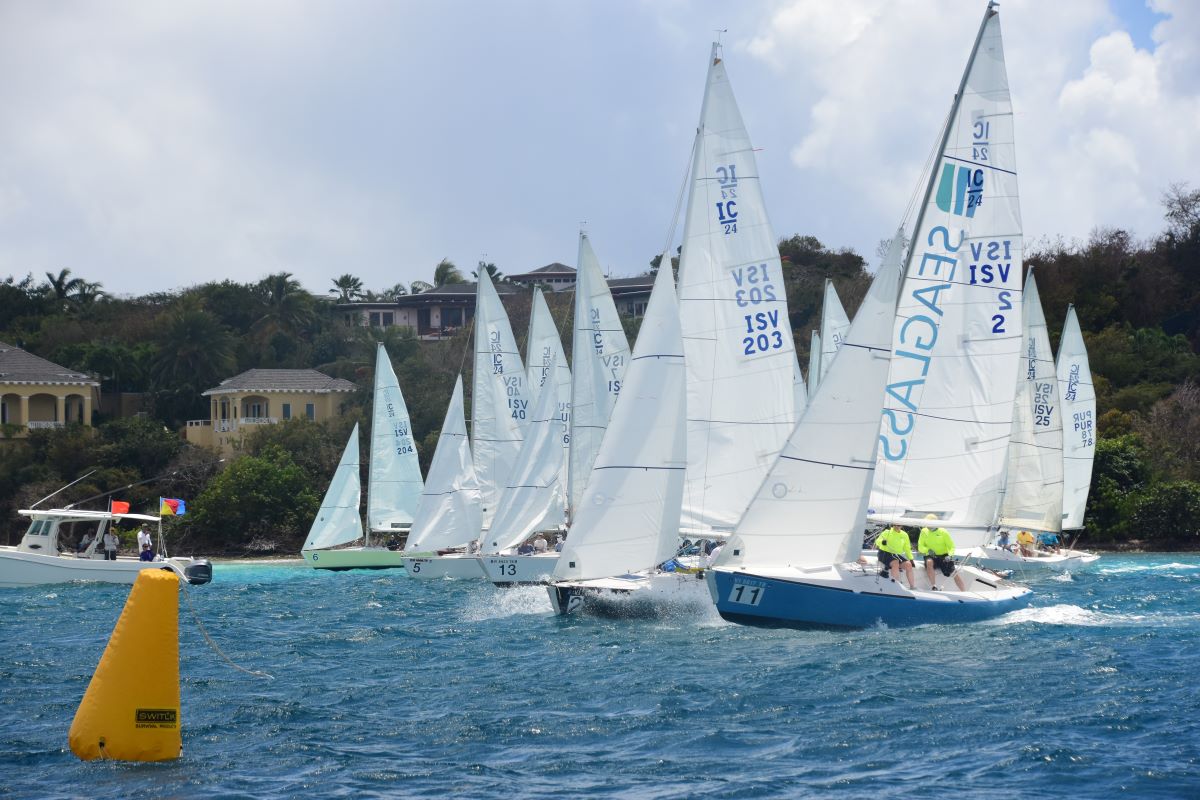 St. Thomas, U.S. Virgin Islands. The start line in the 14-boat IC24 Class looked like thoroughbreds jockeying to be first out of the gate on this first day of racing in the 2021 St. Thomas International Regatta (STIR). Such a position is second nature to St. Thomas’ John Foster, a four-time Olympian who was one of the founders of this 47th annual regatta. Yet, it was Foster’s first time ‘in’ the start. While maneuvering above the line, a gust of wind during a gybe ended with Foster in the drink. It proved a classic man overboard drill with Foster’s crew, Florida-based Bobby Weinstein and Sailing World writer, Mike Hanson, quickly getting the IC under control and Foster climbing up the swim ladder to take his place at the tiller. Without missing a beat, the trio cast off in the IC24 class’s third race of the day, even beating two other boats to the finish. 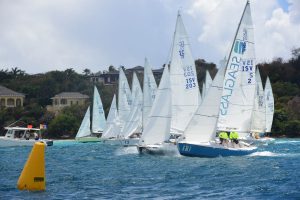 Photo: The IC24 Class takes its start on the first day of racing in STIR 2021. Credit: Dean Barnes

“There I was in the water with the whole class, all those bows, coming at us. It was certainly a different perspective,” says Foster, who chartered the IC24 Huron Girl from the St. Thomas Sailing Center for this regatta.

Thirty-three boats in four classes – CSA Spinnaker Racing, CSA Non-Spinnaker Racing, One-Design IC24 and Hobie Wave – raced in 15 to 20 knots of breeze from the east with a couple of rolling squalls through the day that added a few curve balls to the competition.

In the CSA Spinnaker Racing class, San Diego, CA-based Victor Wild’s Botin 52, FOX, continued to out-fox the competition, and like yesterday’s Round the Rocks Race, leads the class. But barely. Half-point behind after two races is St. Croix’s Chris Stanton on the Melges 24, Brew STX Crew, and yet a half-point behind them in St. Thomas’ Peter Corr’s King 40, Blitz.

“Today’s first race was clean, nice and fast,” says Corr, of the 12 nm course that featured racing east across Pillsbury Sound then westward to round Buck Island and then finish. “The second race is when the squalls blew through. The breeze hit 28 knots at one point, and we were going downwind at 18 knots.”

St. Thomas’ Lawrence Aqui and his crew are leading the CSA Non-Spinnaker Class. In a close second is Puerto Rico’s Fernando Montilla on his Tartan 10, Timon 2. 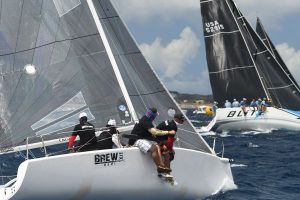 “It’s very difficult and competitive to race against all the different size boats in our class, but we try to keep close to them,” says Montilla. “The strong breeze was nice. There was a very strong current off St. John. But everybody has the same breeze and the same current to sail through, so it tests us all.”

In the IC24 Class, Puerto Rico’s Efrain ‘Fraito’ Lugo and his team are leading on Orion. Last month, Lugo finished third in the highly-competitive J/24 Midwinters in Florida. The IC24 is built from a J/24 hull, so there are similarities between the two designs. Yet in second place is St. Thomas’ Chris Rosenberg, who in the early 2000’s conceived the IC24 design. Add to this the deep talent among the other entries and the IC24 class is definitely one of the most exciting.

“We practiced in the squalls today, so that was exciting,” says Culver. “The thing about squalls is that there is big wind right before they hit followed by light air. It offers something for everyone.”

Social distancing, mask-wearing, and hand sanitization stations are among COVID-19 protocols in place for STIR 2021. On the water, crews in boats such as the one-design IC24 are limited to three this year, and bigger boat classes will remain in social bubbles throughout the regatta. Onshore, there will be staggered class finishes and Happy Hours daily. There will be two awards ceremonies on March 28: 4 pm for IC24s and Hobie Waves, 5 p.m. CSA Spinnaker Racing and CSA Non-Spinnaker Racing boats.

Results for the Round the Rocks Race are available at: https://yachtscoring.com/event_results_detail.cfm?Race_Number=1&eID=14277

Results for STIR are available at: https://yachtscoring.com/event_results_cumulative.cfm?eID=14270 Check for live updates from STIR on Facebook!