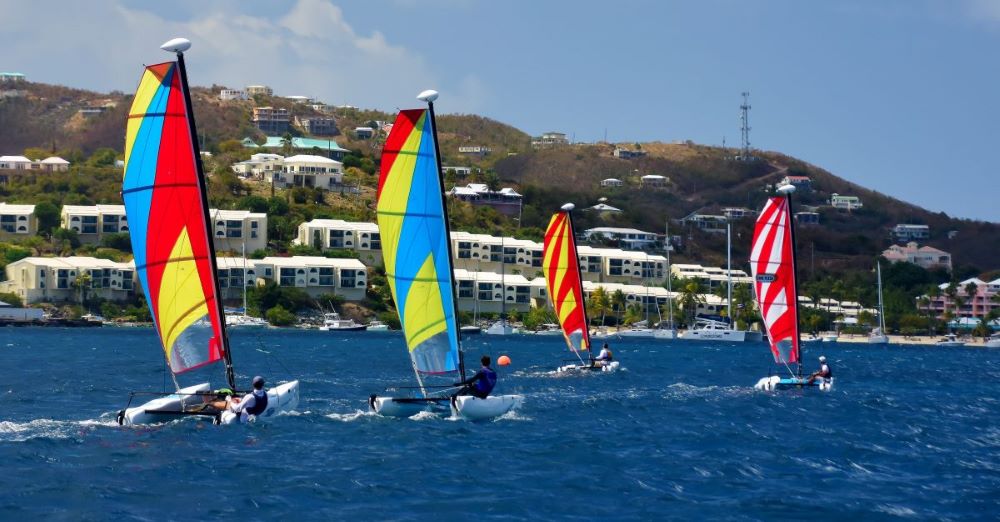 St. Thomas, U.S. Virgin Islands. Sailors in some classes solidified their lead in this second day of racing in the 47th annual St. Thomas International Regatta (STIR).  Others lost the top spot they held yesterday to fellow competitors, while those in the 8-boat Hobie Wave class landed on the scoreboard for the first time. Either way, competition proved keen in the 15 to 20 knots of breeze on the round-the-buoy and round-the-islands courses set off and between St. Thomas and St. John.

“We thought we were fast, but we’re the slowest out there,” says Stanton, who literally raced for the start line for today after having to take the Melges’ mast down, quickly fit a new shroud made fast by a local sailmaker and put the mast back up all before the 11 a.m. start. “Because our class ranges from a 52-footer to us that’s less than half that length at 24-feet, we all sail by ourselves out there. It’s definitely COVID-safe spacing. But on the corrected time, we’re all within a minute or two of each other.” 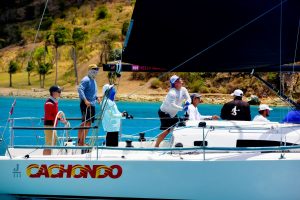 Puerto Rico’s Marco Teixidor, who has raced this regatta in an IC24 in the past, is driving his new J/111, Cachondo, this year.

“We intended to race the Caribbean circuit – St. Maarten, BVI, St. Barths and Antigua. STIR is a great first regatta for us,” says Teixidor, who like many of today’s Caribbean sailors got his start racing Optimists. “So far we are learning a lot about the J111, how to make it go fast and get the boat handling down. We’ve made some good progress throughout the races and hope to continue improving.”

In the CSA Non-Spinnaker Class, St. Thomas’ Lawrence Aqui on his Dufour 40, lengthened his lead over Puerto Rico’s Fernando Montilla’s Tartan 10, Timon 2, from 2 points to five.

Washington, DC’s David McDonough’s and his team on the Pearson 37-2 Trinity III, didn’t lose or gain places on the scoreboard, but that didn’t stop them from having fun.

“While we are not very competitive, we’re more of a cruising boat, I have always enjoyed the phrase ‘racing is simply an excuse to go sailing’,” says McDonough. “The complete delight of sailing, great crew and the camaraderie associated with this regatta make it sailing joy of the very highest order.”

In the One-Design IC24 Class, Puerto Rico’s Efrain ‘Fraito’ Lugo’s Orion’s first day lead was lost to St. Thomas’ Chris Rosenberg’s Bill T who on day two is at the top of the 14-boat class with a 4-point lead.

“It was definitely a learning curve for us on the first day, today we were more consistent,” says Rosenberg, whose crew is two-time Olympian Cy Thompson and long-time St. Thomas sailor, Addison Caproni. “A four-point lead is nothing in this class. Tomorrow, anything could happen.” 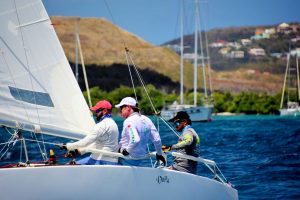 Puerto Rico’s Enrique Figueroa’s team on the chartered IC24, Voila, certainly agreed with the highly competitive nature of the class.

“You can feel like you sailed super well and still finished 6th,” says Figueroa. “I’d have to say that we were in the top 6 within seconds of the other boats and four of the races were real nail biter finishes.”

The Hobie Wave class sailed for the first time today, as for this group STIR is a two-day regatta. St. Thomas’ Nick Bailey on Hobie Wave finished third after 8 races to fellow island father and son, Mark and Julian van den Driessche, who placed first and second, respectively. Yet, Bailey did finish first in three races.

“I haven’t sailed since last year,” says Bailey. “So, for me this morning was all about shaking the rust off. This afternoon, I had the feel of it back. What I like about sailing the Hobie Wave is that it’s simple, just me and one string.”

St. Thomas’ Michael Compton, who ranked 45th in the world in the RS:X Windsurfer in 2006, enjoyed getting into a Hobie racing groove. 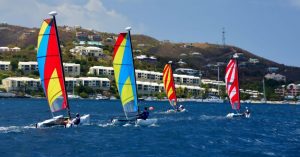 “Sailing comes natural to me. My father taught us when we were young,” says Compton, whose father Marcus Compton sailed his J/27, ATN, for many years in STIR. “I did get one first today, so the potential is there. It’s a blast to come out and have a good time.”

STIR 2021 concludes on Sunday. There will be two awards ceremonies: 4 pm for IC24s and Hobie Waves, and 5 p.m. for CSA Spinnaker Racing and CSA Non-Spinnaker Racing.

Social distancing, mask-wearing, and hand sanitization stations are among COVID-19 protocols in place for STIR 2021. On the water, crews in boats such as the one-design IC24 were limited to three this year, and bigger boat classes have remained in social bubbles throughout the regatta. Onshore, there have been staggered class finishes and staggered Happy Hours daily.

Results for the Round the Rocks Race are available at: https://yachtscoring.com/event_results_detail.cfm?Race_Number=1&eID=14277

Results for STIR are available at: https://yachtscoring.com/event_results_cumulative.cfm?eID=14270 Check for live updates from STIR on Facebook!