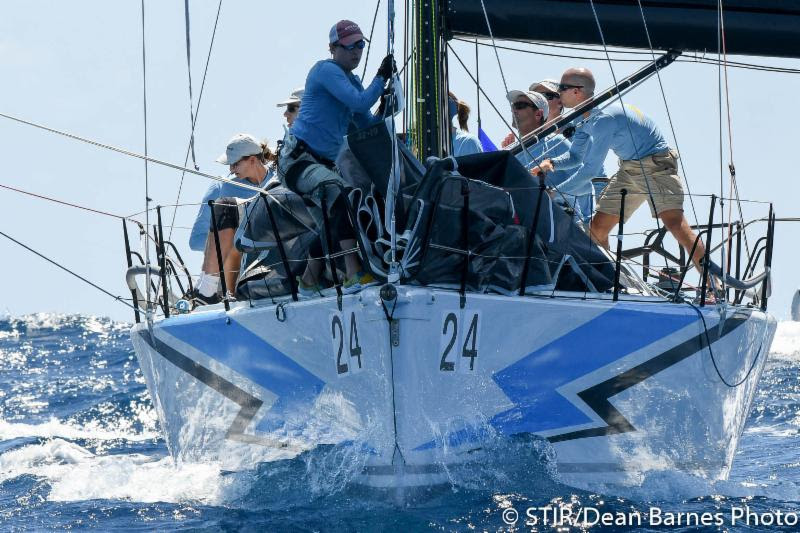 St. Thomas, U.S. Virgin Islands. Some of the 50-plus boats racing on the second day of the 46th St. Thomas International Regatta (STIR), stretched their class leads. Others overtook fellow class competitors to jump into the lead. Either way, blue skies, warm seas and winds blowing steadily at 12 to 15 knots over the round-the-island and round-the-buoy courses proved fun for everyone in this St. Thomas Yacht Club-hosted event,.
A good example of a lead stretch was St. Thomas’ Peter Corr’s King 40, Blitz, in CSA Spinnaker Racing 1. The Blitz team, an international contingent of crew from the USVI, USA, UK and Australia, tied on points after the first day with Antigua’s Pamala Baldwin’s J/122 Liquid. Today, Blitz won the class’s two races thus posting a two-point lead over Liquid.
Meanwhile, the USA’s Ron Zarrella’s team aboard his custom-designed, 49-foot, cold-molded racer/cruiser, Blackfish, maintained a middle of the class position. Yet, they enjoyed a winning day in their own way.

“The racing today, off St. John and in Pillsbury Sound, has to be the most scenic courses I’ve ever done,” says Zarrella, who is competing in STIR for his first time. “We usually sail in the classic yacht regattas, so we weren’t necessarily expecting to win. But, we really wanted to experience this (racing in the Caribbean in STIR).” 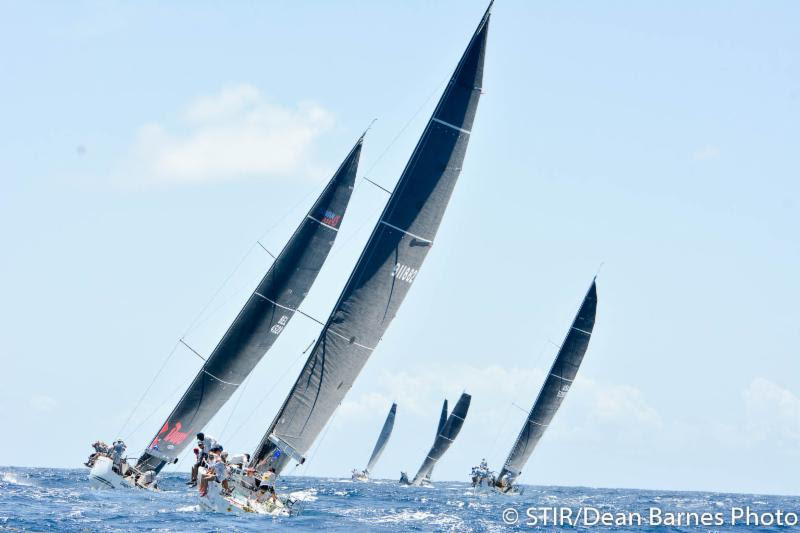 In the CSA Spinnaker Racing 2 class, it was a case of overtaking rather than lead stretching for the St. Croix-based team aboard the J/100, Bad Girl. Bad Girl, with Mackenzie Bryan at the helm, had a tough time on the regattas first race on Friday and needed to retire. The young Crucians, almost all 20-somethings that grew up sailing together in dinghies, came back strong with nothing less than first place finishes. As a result, Bad Girl pushed St. John’s Mike Feierabend’s J/24, Bravissimo, to second. It’s a very close second as both boats are tied at 8-points each.
Stretch was the word in the CSA Non-Spinnaker class as the team aboard Canada’s Rob Butler’s Reflex 38 put a five-point spread between themselves and St. Thomas’ Lawrence Aqui’s Dufour 40, Wild T’ing. Wild T’ing is the defending champion in this class, so Sunday’s final day of racing should be highly competitive in this class. 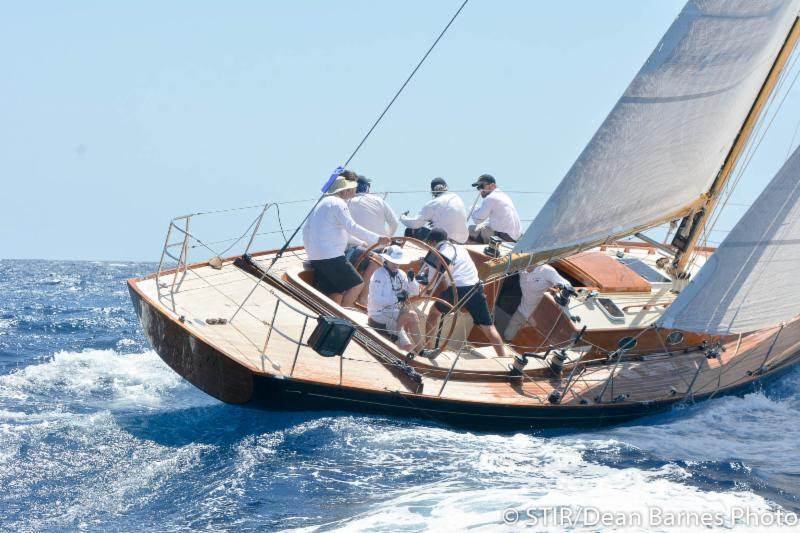 Meanwhile, learning the art and science of sailboat racing was as good as winning aboard Sonoma, a Bristol 41.1 entered in the CSA Non-Spinnaker class. The vessel, a local charter yacht based on St. Croix owned by captain Craig Harms, is a platform for a sail training program for young Virgin Islanders who would like to work professionally in the marine industry.
“There’s regular sailing and then there’s racing, the two are very different. Racing is much more fast paced and it’s a lot of fun,” says Sonoma crew, Kahlil James.
Trimming the jib sheet is Darryl Donohue, Jr.’s job on Sonoma. “Sailing is new to me, and when I saw this program offered, I wanted to do it.”
Terrance Nelson, Jr., who wants to sail professionally says he’s discovered sailing is his calling. “I work at Gold Coast Yachts, so I viewed this opportunity as career development. I always wanted to sail, especially seeing it on TV and seeing it in person off St. Croix. I just wish I had started sailing when I was like age 6 or 7.” 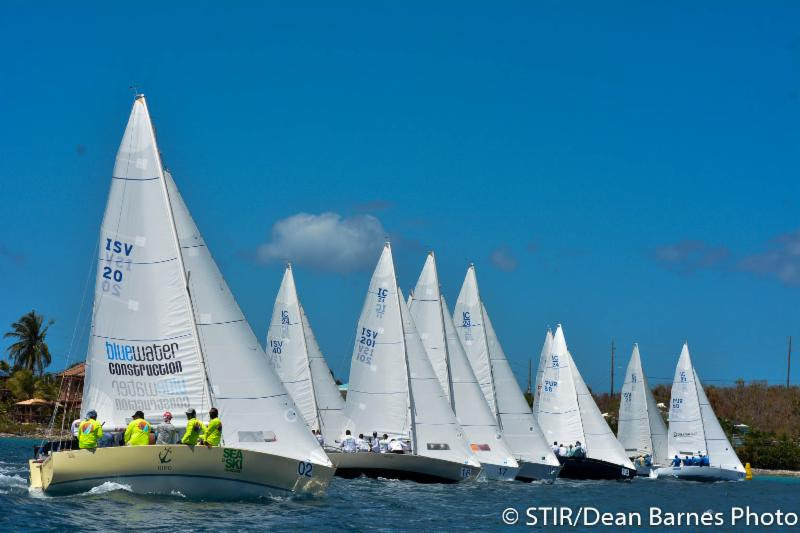 In the IC24 class, Puerto Rican sailors dominated. Ramon Gonzalez and his crew aboard Sembrador didn’t stretch, but they did keep their lead. Closing the gap between first and second place to only four points was Fraito Lugo and his multi-class winning Orion team.
“The advantage for us in Puerto Rico was that our IC24 fleet wasn’t severely damaged by the hurricanes and we were sailing by December,” says Lugo, one of several sailors from Puerto Rico in the past two decades who dominated the J/24 class at international competitions like the Central American and Caribbean Games and Pan American Games. “The IC24 was a natural for us. The big difference though is that the IC is much easier to sail with kids just out of Optimists than the J/24. Ramon use to crew with us. Now he’s racing is own boat very well. We have several young teams now.”
St. John’s Dane Tarr continued dominating the Beach Cat class aboard his Nacra 18 Infusion, Family Cruiser.
Today was the first day of racing for the 9-boat one-design Hobie Wave class. St. Thomas’ PJ Zani topped the class with first in all but two races. The class features adult sailing as well as a combination of adults and children. One of the latter was St. Croix’s Tom Ainger, who traded off the helm with his 9-year-old son, Ian.
“In the morning, the class was spread apart. Then, we all started to bunch up and the class got more competitive. Probably more competitive than we’d like,” joked Ainger.
Competition concludes on Sunday. Racing starts at 11 a.m. An Awards Ceremony will take place at the St. Thomas Yacht Club starting at 6 p.m. 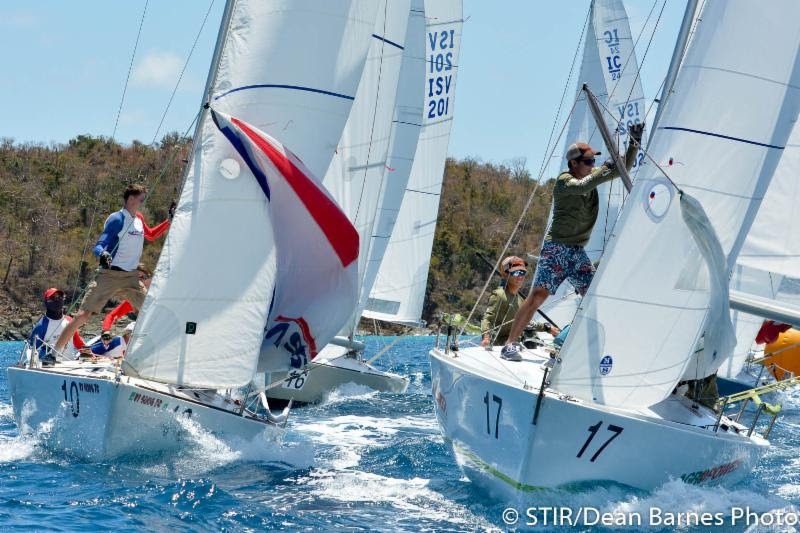