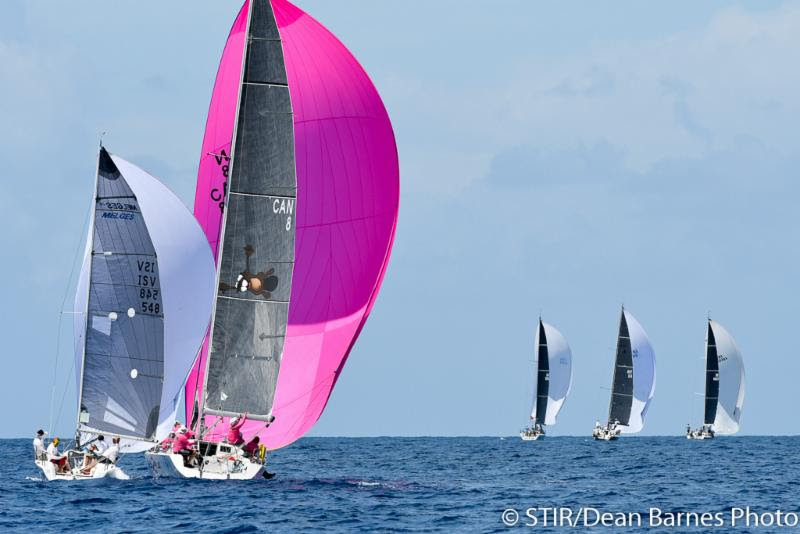 St. Thomas, US Virgin Islands. Boost or bust aptly describes the day for many of the yacht racing teams on the second day of racing in the 45th St. Thomas International Regatta (STIR). Less than 10 knots of breeze proved challenging for some and for others it was a chance to put their light wind skills on display and move up the scoreboard. This theme echoed throughout the nearly 50 boat fleet, whether they were 13- or 70-feet in length, crewed by professionals or weekend warriors or homeported in the Caribbean, U.S. or Europe.

“For us, the light air was an advantage,” says Antigua’s Bernie Evan-Wong, driving his Reichel-Pugh, Team TAZ. “We do well in either light wind or heavy air, because in either of these conditions we can get up on a plane. So, it as a good day for us.”

Touch2Play Racing, Canada’s Rob Butler’s new Reflex 38, continued its reign in the CSA Spinnaker 2 class after today’s two races. However, tied in points is St. Croix’s Peter Stanton driving the Melges 24, Boogaloo. Stanton, and his brothers Chris and Scott, won the overall top yacht award at this event as teenagers back in 2002.

“This is the second keel boat event I have ever skippered,” says Stanton. “All those past regattas I’ve won with my brothers, I have always been on the rail or in every other position except as skipper. This is a new role for me. It’s fun. So far, we’re having a good showing.”

In CSA Non-Spinnaker, St. Thomas’ Lawrence Aqui aboard his Dufour 40, Wild Thing, continues at the top of the class. In second is Canada’s Irek Zubko driving the Pogo 12.5, Hermes.

“We had a perfect start, a perfect race, and then right at the end a cloud came in, the breeze dropped to almost nothing and we sat for what seemed liked 20 minutes before we crossed the finish line,” says Zubko, who last year finished sixth in the 2017 J/24 World Championships, Zubko hopes to return to STIR next year when he’d like to charter an IC24, a design created in the U.S. Virgin Islands, yet utilizes a J/24 hull.

“This is the most competitive class in the regatta, that’s why I sail in it,” says St. Maarten’s Frits Bus, who races with St. Thomas’ Chuck Pessler on Island Water World Racing, which moved from 8th to 6th in class today. “Everybody can sail in heavy air, its takes skill to sail in light air. We are good in light air.”

Light winds were also something St. Thomas’ John Holmberg enjoyed as he competed against 12 other boats in the regatta’s first one-design Hobie Wave Class. “I love light air. It takes work and not everyone is willing to take a deep breath and do what it takes. For example, these boats have two rudders. Rudders create drag in the water, so you want to move them very slightly. Moving the rudders too much slows you down, especially in light air.”

Holmberg, who ended third in class today St. Thomas’ Bill Bacon and Pierre-James Zani in first and second, respectively, was instrumental in introducing the Hobie Wave class to this year’s STIR.

“It’s the perfect beginner boat to serve as a pipeline to get young sailors into the sport. After all, the St. Thomas Yacht Club was founded on small one-design boat racing and look what many of our members have gone onto – the Olympics, the America’s Cup.”