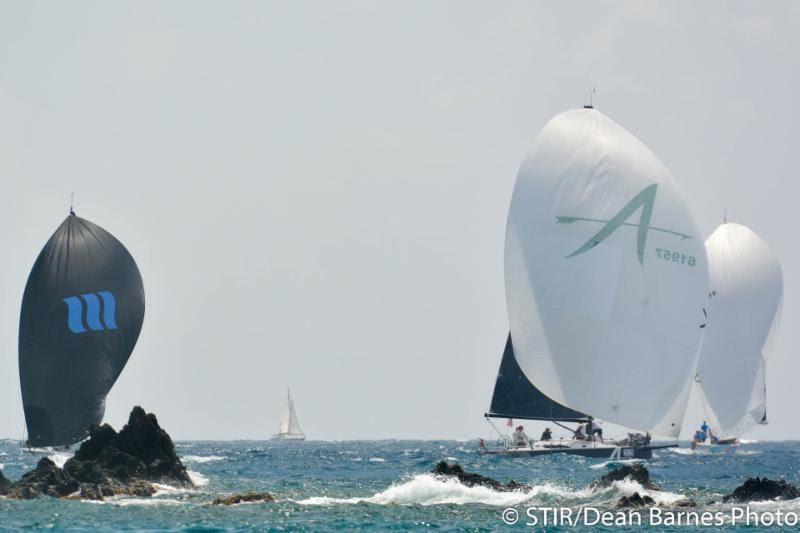 St. Thomas, US Virgin Islands. The Caribbean lived up to its reputation as one of the best places on the planet to sail during the first day of racing in the 45th St. Thomas International Regatta (STIR). The nearly fifty boats, competing in four classes, reveled in the perfect conditions: 10- to 15-knots of breeze, 3- to 5-foot swells, blue sunny skies and temperatures comfortably in the 80s. With the weather throwing no curve balls, the big focus of the day for the racers was on each other. This proved formidable given the depth of talent in each class.

“We’ve sailed extensively in the Mediterranean and Northern Europe, such as in the UK and the Netherlands,” says Philippe Moortgat, the Brussels, Belgian-based owner of the Swan 45, Samantaga, Moortgat has vacationed with his family for many years in the Virgin Islands during the winter holidays and without his boat. This year, he decided to combine his love of racing and the Caribbean on a trip to STIR and other Caribbean regattas. The first day of racing was indeed rewarding as without local knowledge and nearly half of his crew novices, Samantaga leads the CSA Spinnaker Racing class after two races. “I really like sailing around the island, around the rocks. It’s new to us here, but we had good wind and a very good day.”

The Spinnaker 1 class is extremely competitive with only four points separating the first through fifth places. In fact, both second and third place boats, Puerto Rico’s Luis Juarbe’s Melges 32, Soca and the USA’s Robin Team’s chartered J/122, Teamwork/El Ocaso, respectively are tied on points. Ditto for the boats in fourth and fifth place, Antigua’s Bernie Evan-Wong’s RP 37, Team TAZ, and St. Thomas’ Peter Corr’s King 40, Blitz. Blitz won this class in 2017 and Corr hopes to do the same again this year.

“The conditions were great,” says Corr. “But the courses today were mainly reaches. Blitz is at its worst reaching. Hopefully we won’t have long reaching runs tomorrow.”

In the Spinnaker 2 class, Puerto Rico’s David Fernandez, and his team aboard his Holland 11-meter, Atorrante, didn’t take the lead. That honor belonged to Canada’s Rob Butler’s crew aboard his new Reflex 38, Touch2Play Racing. However, what the Puerto Rico-based team aboard the Holland 11 meter had was a solid third place and great fun.

“We had good wind and great competition. Touch2Play and Boogaloo (St. Croix’s Peter Stanton’s Melges 24) were the boats we saw most on the course. In fact, in the first race, we were neck and neck with Touch2Play around Buck and Capella islands. We were higher and faster and traded tacks for a while. Eventually, Touch2Play got away from us,” says Greg Fink, who trimmed spinnaker. Three of Atorrante crew were 16-year-olds who just graduated from the Optimist dinghy: David Perez Fernandez, Kyle Fink and Fabio Santiago.

“At one point, it was almost like we were match racing,” says Zubko.

Aqui agrees and explains, “We got into a tacking duel. They beat us at it, but we beat them overall based on handicap.”

The one-design IC24 class was the largest with 14 boats. The class lead changed often through the day with St. Thomas’ Chris Rosenberg’s Bill T. emerging on top by two points after five races. One competitor, St. John’s Doug McLean, felt just getting to the start line was a victory. “My IC24 was destroyed in (hurricane) Irma. We hauled it out, built a form and had to rebuild the foredeck. Morgan Avery (one of the original designers of the IC24) was working nearby and shared with us what he would do. That was invaluable. We finally launched the boat three days ago. That was the happiest day of my life since the hurricane. We rigged the boat after that. Now, we’re now only sailing, but holding our own, often in the top five in many races today.”