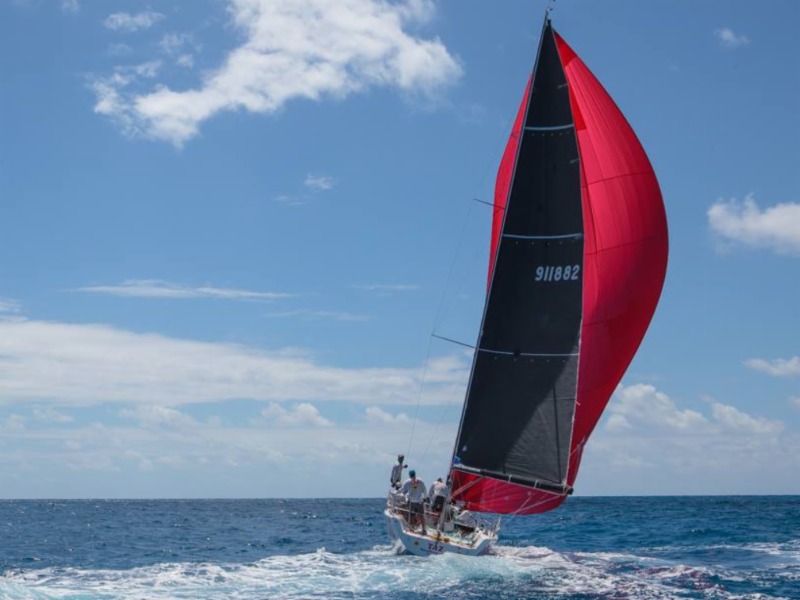 St. Thomas, U.S. Virgin Islands. Nearly a dozen boats will take to the start off St. Thomas’ east end at 10 a.m. for the 4th Round the Rocks Race on Thursday, March 21. The scenic and competitive course features a circumnavigation of the 19-square-mile neighboring island of St. John, home of the Virgin Islands National Park. Then, over 50 boats are registered to race in the 46th St. Thomas International Regatta (STIR), March 22 to 24, from the St. Thomas Yacht Club (STYC). Teams competing in this largest international regatta in the territory and a ‘must do’ event on the Caribbean racing calendar, represent all three U.S. Virgin Islands, Caribbean islands such as Puerto Rico, the British Virgin Islands, St. Maarten and Antigua; U.S. mainland states from New York to Florida; and countries such as Canada, the UK, Belgium and Australia. What’s more, this long recognized ‘Crown Jewel of Caribbean Yacht Racing’ features an impressive range of talent from professional sailors and avid weekend warriors to those just learning to sail both adults and youth.
“We welcome all of our sailors, their families and friends to the 2019 St. Thomas International Regatta,” says Margo S. Lynch, co-regatta director and STYC commodore. “We very much want to thank all of our sponsors, including the U.S. Virgin Islands Department of Tourism, for making this near half-century strong event possible and helping to put the U.S. Virgin Islands on the global sailing map for both the warmth of the constantly blowing trade winds and island resident’s hospitality.” 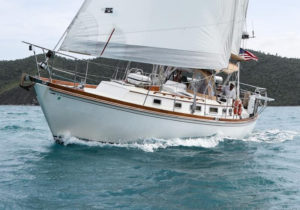 Sneak Preview of Who’s Who Racing

The CSA (Caribbean Sailing Association) Spinnaker class features some of the largest boats in the regatta as well as some of the fastest. Key among them is Blackfish, New York, USA’s Ron Zarrella’s custom-designed, 49-foot, cold-molded racer/cruiser, built by Brooklin Boat Yard, in Brooklin, Maine, and launched in 2017. Brooklin Boat Yard teamed up with designer Jim Taylor of Marblehead, MA, on this very successful design.

“After a successful 2018 racing season in New England where Blackfish competed in the Panerai New England Yacht Series, we were hooked and wanted to continue the competition,” says helmsman Zarrella, whose crew includes wife Carolyn as well as a combination of seasoned Caribbean sailors, including designer Jim Taylor and his son Nat, some amateur friends from Nantucket, and Doyle sailmaker, Glen Cook. “We knew we wanted to bring Blackfish down to the Caribbean for the season but didn’t think we could commit to more than three regattas in the series. So, we chose STIR, the BVI Spring and Antigua Classics. We are looking forward to the friendly competition beyond New England.”

Another hot entry with a fast boat and an all-star crew is Flying Jenny, a C&C 30 owned and sailed by Utah, USA’s Sandra Askew. Askew will be sailing with husband Dave, daughter Olivia, and professional sailors such as Charlie Enright, Will van Cleef, Brady Stagg, Peter Crawford, Norm Berge and Grant Spanhake.

“This is my second time sailing this regatta,” says Askew, who has owned Flying Jenny for three years and last year won the New York Yacht Club Annual Regatta and New York Yacht Club Race Week in Newport. In October, the team was crowned East Coast Champion in the C&C 30 One-Design class at the Annapolis Fall Regatta, hosted by the Storm Trysail Club-Chesapeake Station. “We had such a blast in 2017 that we had to come back. We love the sun, the people, racing around the different islands and having drinks after the races at the yacht club.”

Sailing north from Antigua to join the action is Bernie Evan-Wong and his crew aboard the Reichel-Pugh 37, TAZ. Evan-Wong’s crew already have solid finishes in the RORC Caribbean 600 in February and St. Maarten Heineken Regatta earlier this month under their racing belts.

“TAZ, ‘the Carbon beast’ is unique in the Caribbean as a full-carbon, race boat owned by a Caribbean person,” says Evan-Wong. “We have been competing each year around the entire Caribbean circuit for 15 years.”

Blackfish, Flying Jenny and TAZ will sail in the Round the Rocks Race as well as the traditional three-day STIR.

One of STIR’s first-time entries in the CSA Non-Spinnaker Class is Sonoma. Sonoma, captained by Craig Harms, is a classic 1986-built Bristol 41.1 center cockpit model, that operates as a luxury day and term charter yacht throughout the Virgin Islands. Through Harms involvement with the Virgin Islands Professional Charter Association, he became aware of the Marine Rebuild Fund and its initiative to help local Virgin Islanders learn to sail and become involved in the charter industry. Harms decided to assist this effort by training a crew of Virgin Islanders to compete in regional sailing events. The team’s first event was the St. Croix International Regatta two weeks ago.

“After three days of racing in St. Croix, we look forward to extending the learning that began during that event,” says Harms, whose crew includes Khalil James, Darryl Donohue and Terrence Nelson. “By the third day of sailing we had the team and boat performing well, so we are excited to build on that progress, and hope to be in the hunt. But beyond the racing and sailing experience, we look forward to extending a connection between our St Croix team and the St Thomas program. This will be a week of new experiences for our crew, and they are approaching that with excitement and enthusiasm.”

The biggest and likely the most competitive class will be the IC-24s. Eighteen of these one-design vessels, a modification of a J/24, will be on the start line. Some of these boats are privately owned and some have been chartered from the St. Thomas Sailing Center, located at STUC. An example of the latter is David McBrier, from Erie, PA, USA, and his team.

“Four of our team members participated in the STIR regatta in 2017 on board Peggy and Kevin Gregory’s yacht ‘Odyssey’ a Beneteau 46.7 from Buffalo, NY,” says McBrier. “However, that boat was badly damaged in the 2018 hurricane and the new boat is now set up 100 percent for cruising in the islands. So, for 2019, we decided to come race in the IC/24 class and have some fun racing around the buoys and the local islands. With our experience of J/22, J/70, J/24 and big boats, the IC-24 is going to add a nice fun twist for everyone involved.”

Finally, multihulls will be represented in two classes: beach cats and Hobie Waves.

“This year is looking to be breezier than last year, so that will be a challenge,” says St. Thomas Kyree Culver, who won the Hobie Wave class during its inaugural introduction to STIR last year. “The great thing about the Hobie Wave class for me is getting to skipper a boat in a world class Caribbean regatta.”