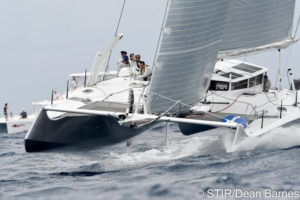 St. Thomas, U.S. Virgin Islands. The St. Thomas International Regatta (STIR) proved its reputation as the ‘Crown Jewel of Caribbean Yacht Racing’ by superbly delivering on its signature mix of round the rocks and round the buoy courses on the event’s second day of competition. What’s more, 6 to 8 foot seas off the island’s east end, gusts blowing to 20 to 25 knots and a mix of rain and sun all added to the fun.

“The windward-leeward courses we had in the morning were hard work,” says Phil Blake, who crewed aboard the IC24 Boat Drinks and is the general manager of IGY’s Yacht Haven Grande. “This, mixed with the passage race in the afternoon, rounded out a wonderful day of sailing. That’s what I love about sailing in the Caribbean. I’ve raced in regattas and Asia and the Middle East and they have the same look and feel, but we are blessed here with consistent tradewinds.”

It was the three W’s – windy, wavy and warm – that appealed most to Curtis Florence, the 2009 Canadian Yachting Association’s Rolex Sailor of the Year, who handled bow on the C&C 30, Nemesis, one of a four boat first-time one-design class in STIR. Florence, as well as helmsman Trey Sheehan, from Cleveland, OH, are members of Team Hooligan, who race a dozen large regattas annually from Key West to San Francisco, and decided to jump off their usual mix of J/70 and Melges 32 racing to sail the C&C.

“The first time we were on a C&C 30 was Thursday for the Round the Rocks Race,” says Sheehan, who flew down to race at the invitation of the owner of the C&C 30 sister ship, Themis. “We got schooled today; the rest of the class beat us pretty well. One-design racing is like hand-to-hand combat. I love it. Especially here in the Caribbean.”

Some of the hottest competition today was in CSA Spinnaker 1. Blitz, the King 40, owned and raced by St. Thomas’ Peter Corr, continued its reign at the head of the class.

“It was another Black Jack day,” says Corr, referring to the 2-1 finish his Aussie crew achieved in the two races yesterday and again today. “Today, we lost one race by 19 seconds. When I saw that, I knew immediately where we lost that time. In the first race, I was trying to cut inside the bottom mark to take breeze away from the Melges 32 (Big Trouble). The idea was to pop his air, go around and get ahead. However, we weren’t able to do that and lost speed.”

Bob Hillier, who hails from Lake Geneva, WI, and his J/122 El Ocaso alumni were trying to nip at Blitz’s lead today.

“We have a real interesting class,” says Hillier, charter manager for Caribbean Yacht Racing Ltd. “Two boats, the Melges 32 and RP 37, plane, we and the King don’t and the Andrews 70 is out so far in front we don’t see them. What each of us needs to do is sail our boats to their potentials.”

Big Trouble, a Melges 32 owned and raced by Chicago, IL’s Tom Elsen, rounds out the top three in CSA Spinnaker 1 going into the last day of racing.

“Our day today was great in every way, and sadly in some ways, a repeat of yesterday. That is, we had another first and another last, from the penthouse to the outhouse,” says Elsen.

Racing was definitely a treat aboard the Royal Danish Navy training ship, Svanen, which like its sister ship, the Thyra, are competing in STIR’s CSA Non-Spinnaker Class as part of the territory’s Transfer Centennial Celebration, or 100 years since the U.S. purchased the islands from Denmark. Both ships are 60-foot, 1960’s-built, Bermuda rigged yawls.

“To race is a special occasion for us,” says Captain Martin Englehardt, “Racing and training don’t go hand in hand. Training, which we mainly do, needs to be slow and thorough. In racing, it’s all about reacting quickly.”

The buoy to buoy part of today’s racing proved a physical one for the beach cat class.

“It was all about hoisting, rounding and dousing,” says St. Thomas’ Teri McKenna, who is crewing for skipper Sandra Tartaglino, on McKenna’s Nacra 17, Flight Risk. The two women are first in class with nothing less than bullets so far.

In the Large Offshore Multihull Class, it’s the 66’ HH Nala, that’s leading. Unfortunately, trouble with the traveler aboard Arethusa that will require some in-yard carbon work, has taken the Gunboat 60 owned by Phil Lotz, of Fort Lauderdale, FL, out of play.

Racing continues and concludes on Sunday.

New this year, STIR introduces its daily Beach Party, with beach games, water toys and DJ music, between 11 a.m. and 6 p.m. The festive shoreside vibe continues right to the beachfront awards ceremony on Sunday, starting at 6:30 p.m. Afterwards, there’s a VI Cultural Celebration. www.stthomasinternationalregatta.com
Back on shore, it was “Party like a sailor” to the music of Spectrum Band.

Margaritaville St. Thomas Restaurant and Resort On Board as Sponsor of 45th St. Thomas International Regatta

Round the Rocks Winners, Nearly 80 Yachts Ready to Stir It Up at 43rd St. Thomas International Regatta