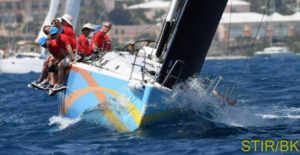 St. Thomas, US Virgin Islands. Nearly a dozen boats reveled in the mix of spectacular scenery plus tactical challenges in brisk winds and bumpy seas as the fleet sailed around the island of St. John in the 3rd Round the Rocks Race. In the end, it was Teamwork powered by El Ocaso, a J122 chartered by Beaufort, NC’s Robin Team and his family from Caribbean Yacht Racing Ltd. that won the CSA Spinnaker 1 Class, plus earned their name on the Perpetual Trophy for Best Elapsed Time. That time was 3 hours, 32 minutes and 54 seconds to circumnavigate the 19-square-mile island of St. John, home of the Virgin Islands National Park.

“This is our first time sailing in the U.S. Virgin Islands, although the team has been racing together for over 35 years,” says Team. “What I loved about the race today was tacking on the weather side in and out of the coves. Also, getting in close to the cliffs, where we’d get a lift. We made great strides following those lifts.”

Antigua’s Bernie Evan-Wong and his crew aboard the Reichel-Pugh 37, Taz, finished second in the CSA Spinnaker I class, followed by Ontario Canada’s Rob Butler and his team aboard the Reflex 38, Touch2Play Racing in third. In the CSA Spinnaker 2 class, the winner was St. Thomas’ Stephen Schmidt and his fellow sailors aboard Schmitt’s Santa Cruz 70, Hotel California Too.