St. Thomas, U.S. Virgin Islands. Round-the-buoy and round-the-rock courses tested the talents of seasoned sailors and weekend warriors alike on the second day of racing in the 42nd St. Thomas International Regatta (STIR), presented by TAG Heuer. The 62 yacht fleet split onto two different courses that maximized the enjoyment for crews of varying skill levels as well as the performance of assorted yacht makes and models. The result was a whole lot of racing going on and a ton of fun.

The IC-24 and Beach Cat classes sailed around the buoys in Great Bay, which fronts the Ritz-Carlton, St. Thomas resort.

“The ICs were a tough class today with some really close competition,” says Michael Royer, a native of Peabody, Massachusetts, who moved to Puerto Rico three years ago, took up sailboat racing and is now getting his feet wet by competing on other islands. “This is the first time our crew has sailed together. So, we’ve been working the kinks out and should have it all figured out by the last day.”

Puerto Rico’s Cachondo, Sembrador and Porfin 7, respectively, are in first through third in the IC-24 class. 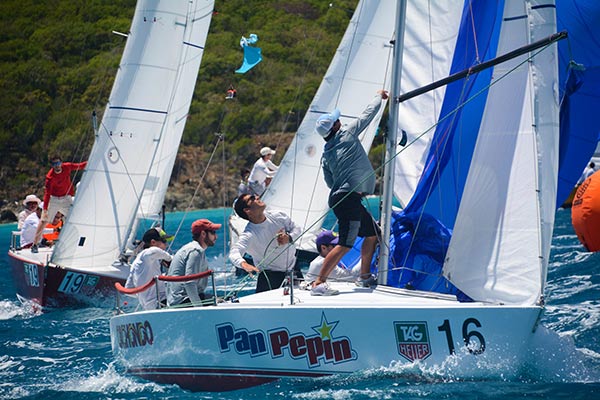 Meanwhile, St. Thomas, USVI, sailors ranked at the top of the scoreboard in the Beach Cats. Flight Risk is first, followed by Island Sol and Whiplash.

The remaining six of the STIR’s eight classes sailed a course that wound around Great St. James to St. John and its offshore islands. This, combined with yesterday’s route to Charlotte Amalie and back, gave racers a chance to see the islands by sea as well as test themselves against the currents and wind patterns provided by rocks they rounded.

This type of course was perfect for entries such as Marcus Cholerton-Brown’s Sunset Child, a J/120 racing in the CSA 2 class that is owned and chartered by his US- and UK-based company, Performance Yacht Charter.

“Today was totally awesome. We have crew from the US, UK, Russia, Italy, Columbia and Portugal. Some have never raced before. Everyone gravitated to the position on the boat they were most comfortable with and it all worked out well,” says Cholerton-Brown, who is on the helm. 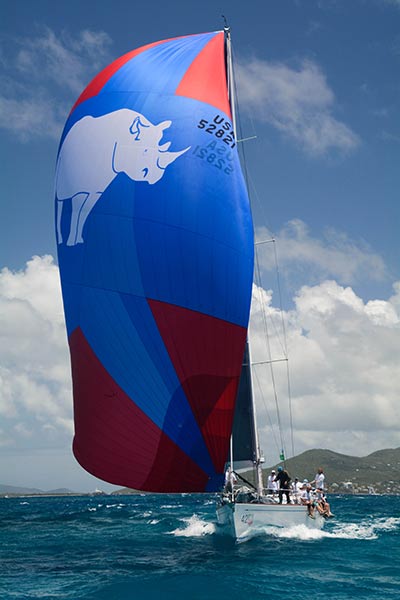 In CSA 3, the BVI’s Chris Haycraft, who is on the helm of his Sirena 38, Pipedream, found himself the odd man out in the class.

“All of the courses today favored asymmetrical spinnaker boats and we were the only non-asymmetrical. It’s a tough class, but we had some great racing,” says Haycraft, whose family has sailed in the STIR all 42 years.

Dark Star, which won the CSA 3 in the past, is in first, followed by Boogaloo and Solstice.

The four-member crew aboard Tony Sanpere’s Catalina 30, Nauticayenne, boasted over 150 years of sailing experience. What’s more, this CSA Non-Spinnaker entrant represents the VI Disabled Sailing Team and has both physically- and visually-challenged crew.

“Our goal is Rio 2016,” says Sanpere. “If we get there, and there is an 80 percent chance we’ll make it, we’ll set a record for being the oldest Paralympic team in history.”

Nauticayenne is third in the class, with Hotel California Too first and Avanti second.

A new class to the STIR this year is Non-Rated Cruising.

“This class is an opportunity for non-racing competitive boats with no professional crew to get an introduction and be part of the racing,” says the USVI’s Brian Emerich, who is helming his Beneteau 40, Augura, and is currently in third. “The long race around the islands gave us a chance to get trimmed out and enjoy the sailing too.”

One of the winningest sailors in the Caribbean, Antigua’s Bernie Evan-Wong, sailed from Antigua to race in the STIR and is in the CSA 2 class.

“We had a good day, but we weren’t able to get the boat sailing up to its handicap,” says Evan-Wong, whose TAZ is a high-performance Reichel-Pugh 37. “Even so, what I liked best was a mix of round-the-buoy and round-the-island racing that this regatta offers. It’s the best of both worlds.”

In the remaining two classes, Spookie leads CSA 1, while Lazy Dog has taken over the frontrunner position in the one-design Melges 32 Class. 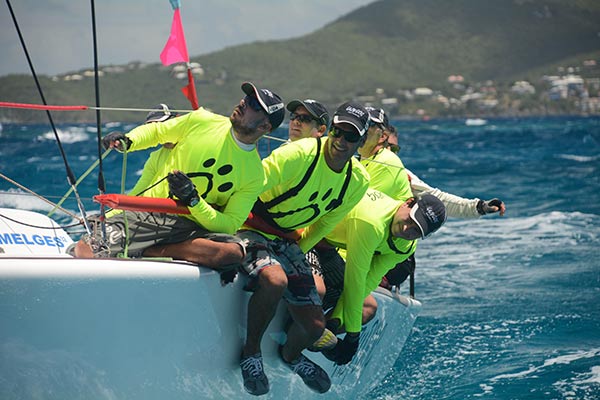 Racing continues and concludes on Sunday. Music by Full Circle greets the fleet from 2:30-5:30 p.m. The Regatta Awards Ceremony starts at 6 p.m. on the STYC beach, followed by the Final Fling Party with Spectrum Band playing from 7-11 p.m.