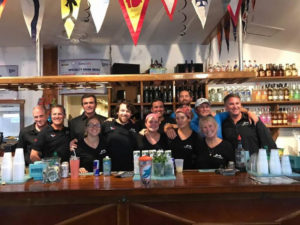 St. Thomas, US Virgin Islands. If your bucket list includes having a drink at the 2017 Favorite Yachting Bar in the Caribbean, then tick that box with us March 23 to 25 at the St. Thomas International Regatta. Announced on January 3, 50° North, creators of Wight Vodka and Scuttlebutt Europe announced that the STIR-host St. Thomas Yacht Club won its annual contest in a special Caribbean category to recognize bars that were hard hit by the hurricanes last fall.

“It’s an honor to have received this recognition, especially as the Club is still recovering from the after effects of hurricanes Irma and Maria,” says regatta director, Bill Canfield. “As a result, this will not be our biggest STIR, but we can guarantee everyone a special time. For those who have never visited, Cowpet Bay is a beautiful place to finish a race and the Club and its bar are located beachfront here. Plus, for those that are long timers, think back to your first Caribbean regatta and what a great experience it was. We are offering this same vibe this year with an emphasis on ‘simple fun and great sailing’. That’s why we love it here!”

IC24’s A Plenty
A sampling of who’s registered so far shows what might be the largest one-design class in a Caribbean regatta. Over 20 IC24s, with sailors from around the Caribbean and World, are expected to compete in up to a dozen races over three days with a mix of windward/leeward and island races.

“This event gathers the largest number of IC24s in the Caribbean, offers great race courses, good variety and organizers keep it fun both on and off the water,” says Puerto Rico’s Jaime Torres, who will helm his Smile and Wave with a strong team, consisting of Alejandro Carrera on bow and Gretchen Ortiz in the pit. “It’s a long-standing tradition for my family and I to race and enjoy the spectacular hospitality of the St. Thomas Yacht Club for the St. Thomas International Regatta. Now, we have a new tradition. That is, we ask talented kids or women to come in and drive the boat, thus giving the class a source of new talent.”

New Boats Debut in Racing Class
Teams from Canada, the U.S. mainland and Puerto Rico are all looking forward to racing new boats at the 2018 STIR. One of these is Rob Butler’s Touch2Play racing team.

“The J88, which we raced last year in STIR, has been replaced with a Reflex 38,” says Larry Huibers, manager of Collingwood, Ontario-based Butler’s team. “It’s a slightly larger platform, which will host our crew in a little more comfort and make transiting to the other events easier. The blend of great tight racing and fun shore side activities makes coming back a priority for us.”

“We are a mix of fun, avid sailors, mostly based in the Great Lakes, peppered with East and West Coast, Canadian and European flavor,” he says. “Our team is comprised of a group of highly competitive, qualified amateurs with broad experience that includes a mix of ocean, buoy, medium to long distance and one-design sailboat racing. STIR 2018 will be one of the highlights of a season spend enjoying fun island-hopping deliveries as we explore the beauty of the Caribbean.”

Back after a year’s hiatus is STIR 2016 racing class winners, Puerto Rico’s Jonathan Lipuscek and his team aboard a new Dark Star.

“The new Dark Star is a recently purchased McConaghy 38, which is larger and faster than the previous Dark Star, a J/105,” explains Rafael ‘Rafi’ Martinez, who like many of the team’s crew have raced in STIR since the early 1990s.” Our core crew will remain the same and we are pumped to see what this boat can do in the Caribbean trade winds.”
Photo: Rob Butler’s former J/88 Touch2Play races in STIR 2017. Butler will be back for 2018 on his new yet same-named, Reflex 38. Credit: Dean Barnes.

Wind was the Word on the First Day of Racing in the St. Thomas International Regatta

Rock & Roll Time on the Second Day of the St. Thomas International Regatta