St. Thomas, U.S. Virgin Islands. A sleek fleet of some 80 yachts is expected to compete in the St. Thomas International Regatta (STIR), presented by TAG Heuer. Set for March 27 to 29 and hosted out of the St. Thomas Yacht Club, entries include a spectacular mix of newcomers from abroad and regional favorites with crews ranging from Olympic and America’s Cup sailors to yacht club and family teams. Plus, it’s not too late to register! 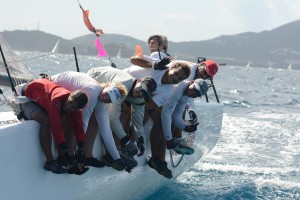 A Sampling of Entries

Fresh off an IRC class win with an award for Best Performance Yacht in the Fort Lauderdale to Key West Race in January, Steve and Heidi Benjamin, will sail their Carkeek 40, Spookie, in St. Thomas. The Benjamin’s, from Norwalk, Connecticut, will race with 12 crew, including St. Thomas’ Peter Holmberg, an Olympic silver medalist and America’s Cup sailor, as strategist, and Detroit, Michigan’s Bora Gulari, two-time Moth World Champion, Rolex Yachtsman of the Year and America’s Cup sailor, as navigator. Benjamin, who will helm, is himself an Olympic silver medalist. With his talented team behind him, Benjamin is a strong contender to pocket a TAG Heuer Aquaracer Caribbean Limited Edition watch, the prestigious prize for STIR’s class winning skippers.

Class wins in the Fastnet, Cowes Week and Round the Island (Isle of Wight) Race make Lymington, UK’s Peter Scholfield’s HOD 35, Zarafa, is definitely an entry to watch for a podium finish. “I am doing the Caribbean season so it was a given that I would compete in the St. Thomas International Regatta,” says Scholfield, whose Zarafa was designed by Rob Humphreys, has a wood epoxy hull and was launched in late 1997. His crew include members of the Royal Armored Corps Yacht Club. Scholfield is a retired major in the Corps as well as an experienced yachtsman.

Better Than…, a Swan 42 owned by New York Yacht Club member Gosia Rojek and husband, Andrzej, will race for the first time in St. Thomas after competing aboard their son’s friend’s Swan 45, Devocean, in 2006 and 2007. “I remember the great time we had sailing Devocean and was able to convince my husband to give up his passion for skiing to sail our own boat this year,” says Rojek, who organized an all-women crew for the Swan 42 Nationals in Newport, Rhode Island, in 2008 and 2009, and has since been one of the few female drivers in the IRC class. Better Than…, with Rojek driving, won its IRC class and overall in the Rye, New York-based American Yacht Club’s Spring Series in 2013. 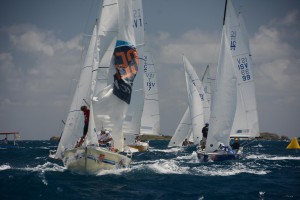 Another first time entry is the TP 52, Conviction, owned by the Barbados Offshore Sailing Syndicate. The syndicate, founded by Bajan-born Clint Brooks, is an effort to raise awareness for the southern Caribbean’s sailors and regattas. Conviction will be sailed by an all Bajan crew. “Conviction is a new boat to us. Our first regatta was the Mount Gay Round Barbados Race Series in January where, with a youth team of 13- to 16 years onboard, we placed second in the series and set a record for the under 60-foot class in the Round the Island Race. We are incredibly pleased with the boat and look forward to the upcoming regatta,” says Brooks, who is no stranger to the U.S. Virgin Islands where he sailed with Peter Holmberg during the Team Caribbean America’s Cup days in the late 1990s.

This is the first year that Holland, Michigan’s Mitch Padnos and his crew from the Macatawa Bay Yacht Club will charter the J/122, El Ocaso. The boat, under a different skipper and crew, has participated in the STIR on several occasions and won its class in 2014. “We were attracted to this year’s event as the boat was available which allowed the Michigan crew an early spring tune up. In addition, the idea of racing in St. Thomas was too much to resist,” says Padnos. His Michigan crew has been active in buoy racing on the local Michigan scene, the Chicago NOOD Regatta and in the Harbor Springs Series hosted by Little Traverse Yacht Club as well as in distance races such as the Trans-Michigan Race, Queens Cup and many Chicago to Mackinac races.

Sunset Child, a J/120 in Performance Yacht Racing USA’s charter fleet, most recently competed in the Pineapple Cup to Montego Bay Race in February with a Jamaican team onboard. “This is the first time we will sail with her in St. Thomas,” says skipper Marcus Cholerton-Brown. “We have a whole family racing onboard, plus some PYR-USA crew and myself. We can’t wait to get stuck in.”

This is the second time that Lancelot II, a Beneteau First 40.7 owned by Britannia Events and based in Hamble, UK, will sail in the STIR. A first in class finish could definitely be in the cards as Lancelot II looks to defend its win from last year. “Our crew for this regatta is Team Boston who are a group of family and friends from the US who have sailed together on Lancelot II in the Caribbean for three years now. Their Martini glass logo on the masthead spinnaker will make them easy to spot downwind,” says event manager, Prue Nash.

The STIR’s one-design classes are expanding.

“We will have 5 Melges 32s – Smile and Wave, SOCA, Lazy Dog, Kick’em Jenny and Big Trouble – up from 3 last year,” says Puerto Rico’s Jaime Torres, owner/shipper of Smile and Wave. With a steady crew and a proven fast and reliable boat, Torres is the odds-on favorite to win the Melges 32 class at STIR. “STIR is the fourth stop in the 9-event Melges 32 Caribbean Championship Series,” says Torres. “The teams are all well-tuned and hungry for the ranking points up for grabs.”

Meanwhile, the homegrown IC-24 class is expected to be the largest of the regatta with 25-plus entries. “The best part about racing in the IC-24 class is the level of competition and how close the racing is,” says St. Thomas’ Mike Finley, who will sail his Ocean Potion. “Plus, we have fun racing and fun afterwards.”

Beach barbeques, nightly parties featuring Presidente beer and the Virgin Islands’ own Cruzan Rum, and live bands will take place at St. Thomas Yacht Club Thursday March 26, Friday March 27 and Sunday March 29. The Awards Ceremony takes place Sunday March 29 starting at 7 p.m. on the beach in front of the St. Thomas Yacht Club. On Saturday March 28, there’s the newest STIR tradition: the Yacht Haven Grande Party with Spectrum Band on stage. Have dinner and enjoy the best of St. Thomas restaurants and bars nearby Yacht Haven Grande while detuning after a day of racing.

TAG Heuer is a Swiss Avant-Garde watchmaker founded in 1860. Its rich heritage is built on pushing boundaries and breaking rules, harnessing mental fortitude to overcome technology restraints and create daring watches and chronographs. Long-lasting partnerships with watersports teams and charismatic ambassadors drive it to break with watchmaking conventions, and as a consequence, master time with unparalleled precision. The brand’s watersport DNA, as well as the amazing athletes who belong to its dream team, reflect its core values of teamwork, mental strength, courage and ambition. Its slogan, DON’T CRACK UNDER PRESSURE, is far more than a claim–it is a mindset. TAG Heuer is exclusively sold at Little Switzerland and Jewels St. Thomas, including a TAG Heuer Boutique, on Main Street, in Charlotte Amalie, St. Thomas. For information, call (248) 809-5560 ext. 10110

Time for Winners at the 43rd St. Thomas International Regatta

The Moorings Onboard as Sponsor, 2021 St. Thomas International Regatta Kicks Off Thursday with Round the Rocks Race