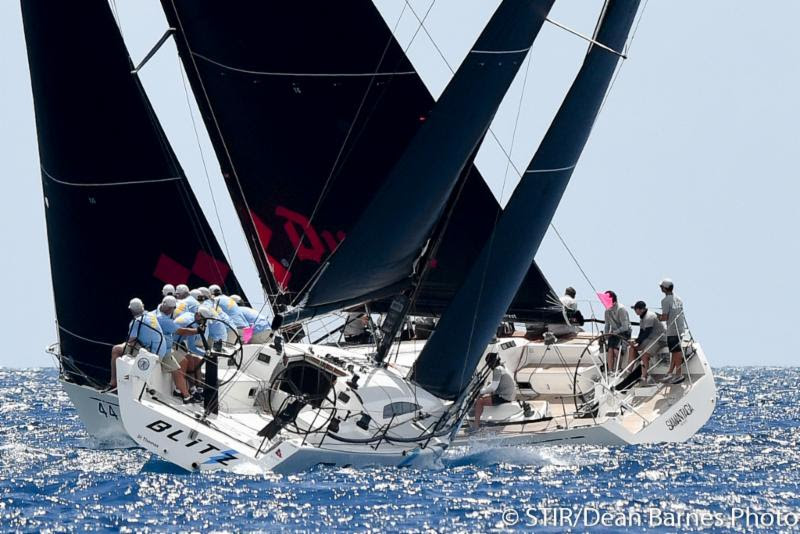 St. Thomas, US Virgin Islands. Great racing is what the St. Thomas International Regatta (STIR) is renowned for. This year, the 45th annual, held only seven months after two Category 5 hurricanes, certainly didn’t disappoint. In fact, there were tied scores among top competitors in three of five classes going into the third and final day of racing.

“The weather was fantastic. The race committee did a fantastic job. We sailed well and made no mistakes. I think that was our key to winning,” says Koem De Smedt, tactician aboard Belgian’s Philippe Moortgat’s Swan 45, Samantage, which soundly led the CSA Spinnaker 1 Class throughout the three-day regatta. “We had planned to come even before the hurricanes. It was always Philippe’s dream to bring his boat here and race the Caribbean season. We had some local knowledge aboard, and that helped since we usually do round-the-buoy rather than round-the-island racing in Europe. Our crew is good and we have sailed together for the past decade. However, it was hard for them to keep their eyes in the boat yesterday when we sailed off St. John. It was so beautiful. They wanted to sight-see.”

CSA Spinnaker 1 Class
The tied scores in CSA Spinnaker 1 going into the last day’s racing were for second and third in class. In the end, St. Thomas’ Peter Corr and his team aboard the King 40 Blitz moved up to a solid second by winning the day’s one race. Puerto Rico’s Luis Juarbe aboard his Melges 32, Soca, rounded out third.

“This is our third regatta on the new boat and we had pretty well worked out the kinks by the time we arrived here, although the Round the Rocks Race was a nice tune up for us,” says Butler, whose signature pink hull, spinnaker and team shirts is a nod to the team’s fundraising efforts for breast cancer research. “The competition was excellent. Basically, the winner came down to who won the race today.”

CSA Non-Spinnaker Class
The CSA Non-Spinnaker Class saw St. Thomas’ Lawrence Aqui’s well-sailed Dufour 40, Wild T’ing turn in a solid performance by scoring four firsts in five races. This was remarkable considering the boat was toppled while on the hard in the British Virgin Islands during the hurricanes and was only ready to sail three weeks ago following repair and a trip to St. Maarten for rigging.

“We didn’t make mistakes, while the other boats took flyers when they saw us ahead and it ended up costing them,” explains St. Thomas’ Mike Williams, who called tactics aboard Wild T’ing. “What we enjoyed most was the last race, when the race committee combined CSA 2 and Non-spinnaker. It gave us a chance to actually see other race boats, not just compete against them based on time.”

One-design Hobie Wave Class
The one-design Hobie Wave class was a STIR first, although beach cats in general have always been represented at this event. St. Thomas’ Bill Bacon and Pierre-James Zani were tied for first going into the final day. In the end, it was St. Thomas’ Kyree Culver who won literally single-handedly and in her first major regatta.

“I was always taught to pay attention to the sails and boat speed and that’s what I did. Plus, John Holmberg gave a clinic the day before the regatta and that really helped,” says Culver, who works at the St. Thomas Sailing Center, which chartered six Hobie Waves for STIR. Another six were brought over from Cruz Bay Watersports, in St. John.

IC24 Class
Finally, the IC24 class definitely proved its top notch competitive nature, with the lead changing several times before the final curtain. In the end, it was St. Thomas Chris Rosenberg, who with St. Thomas boat builder Morgan Avery innovated the IC24 design, that won by a comfortable lead.

“We started practicing in January and trained together 8 to 10 times before the regatta. I think that’s what led to our victory,” says Rosenberg. “It’s amazing, when you considered that the IC24s at the Club were all smashed. Our boat was essentially totaled, but the St. Thomas Sailing Center put them all back together again beautifully, including bringing in a skilled fiberglasser, Chris Small, from New England.”

Rosenberg, who has sailed in this regatta and championed class wins several times, sums up the spirit of this event best when he says, “This year’s STIR proved every bit as exciting as years past. We had the addition of the Hobie Waves, more IC24s than in the past and substantial CSA classes. It was incredible.”

Puerto Rico’s Marco Teixidor aboard Cachondo and Fraito Lugo on Orion, finished second and third in the IC24 class, respectively.

In total, nearly 50 boats ranging from 13- to 70-feet in length raced. Crews represented everything from professional sailors to weekend warriors and boats hailed from the U.S. Virgin Islands, Puerto Rico, Antigua, the U.S.A, Canada and Europe.