St. Thomas, U.S. Virgin Islands. Spectacular broaches, inadvertent jibes, man overboard rescues and crazy capsizes created a dramatic start to the 42nd St. Thomas International Regatta (STIR), presented by TAG Heuer. Some of the 62 yachts sailing in this March 27 to 29 event hosted out of the St. Thomas Yacht Club (STYC) would have called the 20- to 25-plus knot breeze and 4- to 6-foot seas survival conditions if it were not for the brilliant sunny skies and 80 degree air and water temperatures. Others reveled in the ‘typical Caribbean’ conditions and enjoyed the ride on a course that took the fleet to the Charlotte Amalie harbor and back. Everyone, however, agreed that the first day of racing in the STIR delivered the bucket list experience they anticipated.

“The life line broke right before the first start and we had crew in the water,” explains Puerto Rico’s Ivan Aponte-Gonzalez, bowman on Luis Juarbe’s Melges 32, SOCA, one of four yachts in this one-design class. “We were able to pick him up, make the start on time and actually win the race. What was really cool was going 16 to 17 knots downwind into town.”

SOCA leads the Melges 32 class tied on points with Smile and Wave in second place and Lazy Dog third after two races.

Turtling upside down with hulls in the air was the order of the day in the Beach Cat Class. It wasn’t a capsize that took the USVI Hobie 16 entry of Nuts, driven by 18-year old Nicholas Gartner with the UK’s Ian Bartlett as crew, out of the first race. 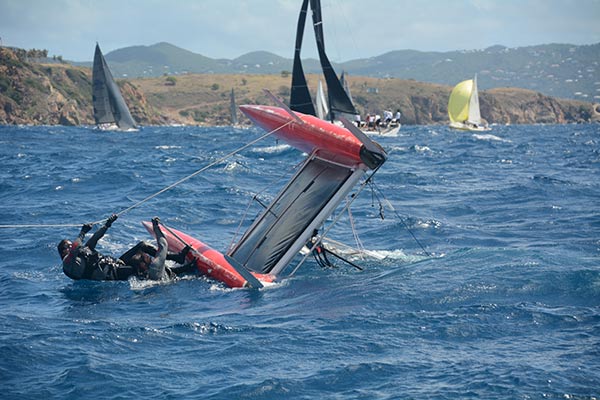 “We blew the jib before the start,” says Gartner, a senior at Antilles School who will attend either the U.S. Naval Academy or U.S. Merchant Marine Academy in the fall. “So, we came in, drove off to get another jib, rushed to put it on and then hauled off to the harbor. Thanks to the heavy wind we got there just in time to make the second race and finished third.”

In the record 20-entry IC-24 Class, the BVI’s Jason Putley, on the tiller aboard CYM/INTAC, said it wasn’t so much the wind and swells as it was first day tactical issues that lead to a collision in the last of the classes three races.

“We led the first race all the way down the southside of the island (St. Thomas) until the last 25 seconds when two other boats beat us. We did pretty well in the second race, then in the third we hit another boat and our shrouds got locked together. The whole class passed us before we got untangled and got going again,” says Putley, an 11th grader at Tortola’s Cedar School, who plans to make an Olympic bid in the Laser for 2020.

Cachondo tops the IC-24 Class followed by Porfin 7 and Sembrador. 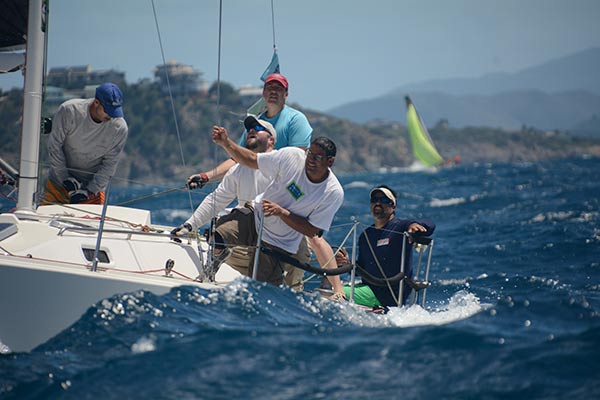 Four of his crew had never sailed before, but that didn’t stop the UK’s Peter Scholfield from achieving solid mid-pack finishes aboard his HOD 35, Zarafa, in the highly-competitive CSA 3 Class.

“It was great fun sailing today even though we didn’t necessarily come in covered in glory,” says Scholfield, a retired major in the Royal Armored Corps, whose crew are all members of the Royal Dragoon Guards who have recently served in Afghanistan. “You could say the boys had a baptism by fire.”

Dark Star, Boogaloo and Solstice, respectively, are the top three leaders in the CSA 3 Class.

The CSA 2 sported the sleek race boats, among them Nantucket Yacht Club-based Kismet, a Morris 48 owned and helmed by David Southwell.

“The conditions today are what we expect when we race in the Caribbean,” says Southwell. “We’ve raced in the RORC Caribbean 600 two years and this is the first time we’re sailing in St. Thomas. It’s very competitive here and that’s what we really like.” 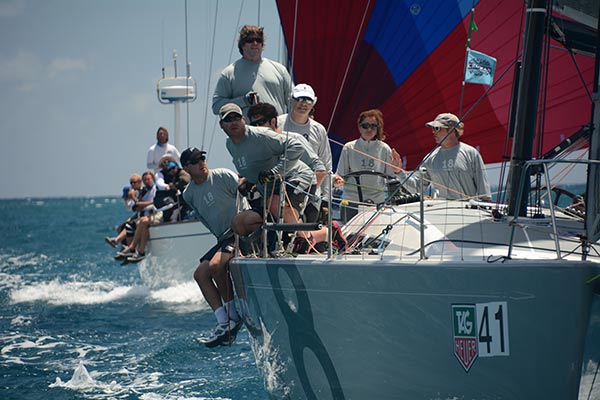 In the remaining three classes, yachts currently in first are Conviction/Team Varg in CSA 1, Hotel California Too in CSA Non-Spinnaker and Odyssey in Non-Rated Cruising.

Racing continues on Saturday off the southeast side of St. Thomas. Music by Flip Switch plays at STYC from 3-6 p.m. Then, from 6 p.m.-Midnight, party like at sailor at the STIR’s Yacht Haven Grande Party. Listen to Spectrum Band on stage, while dining and imbibing at nearby restaurants and bars.

Sailors cast off on the final day of regatta competition on Sunday March 29. Music by Full Circle greets the fleet from 2:30-5:30 p.m. The Regatta Awards Ceremony starts at 6 p.m. on the STYC beach, followed by the Final Fling Party with Spectrum Band playing from 7-11 p.m.

Light Winds Keep Sailors on their Tactical Toes on Day 2