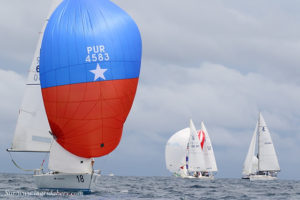 Nearly cat’s paw calm in the morning combined with typical Caribbean tradewinds gusting to 20-plus knots in the afternoon provided something for everyone during the first day’s racing to the Charlotte Amalie harbor and back at the 44th St. Thomas International Regatta. These polar-opposite conditions plus the challenge of round the islands rather than strictly buoy racing proved the talk of why some of the best sailors in the Caribbean, U.S., Canada, Australia and New Zealand put STIR on their list of must-do’ regattas each year.

“It was certainly tricky sailing,” says Martin van Breems, president of the Sound Sailing Center in Norwalk, CT, whose race-chartered VAr 37, Varuna, crewed by Center members finished the two-race day first in the CSA Non-Spinnaker Class. “We had 10 crew onboard. So, on the downwind leg when it was so light, I had them all up on the bow to keep the stern out and the boat moving. Then, upwind, when the wind picked up, they all rode the rail all the way back.

Competitors in the Large Offshore Multihull Class especially reveled in the afternoon breeze.

“A squall went through mid-day and didn’t progress, but the breeze kept building. That was fine for us. It wasn’t overpowering. In fact, we were able to fly a hull to the finish and that’s what Gunboats like to do,” says Amy Drinker, of Marblehead, MA, who worked the pit with pit boss, Cam Lewis, on the Gunboat 60, Flow, last year’s class winner. Lewis is a well-respected multihull sailor who back in the 80’s broke the mythical Jules Verne 80-day world navigation by less than a day on an 86-foot catamaran and as a result earned the coveted Rolex Sailor of the Year award.

This year’s first-ever one-design C&C 30 class really appreciated both the conditions and the courses.

“I used to cruise down here and am pretty familiar with the islands,” says Walt Thirion, of Annapolis, MD, who owns two boats racing: Nemesis and Themis. “That helped us today as we were able to cut a big chunk of time off the upwind leg by knowing we could cut in closer to certain islands than some other boats in the class without this local knowledge.”

Thirion’s co-owner of the boats, Geoff Ewenson, a former Olympic Finn sailor from Annapolis, MD, vows to grow the C&C class at STIR.

“We plan to have at least 8 boats down here next year,” says Ewenson.

The one-design IC24 is the largest class of the regatta. It’s a design that starts with an old unused J/24 hull.

“We had talked with the original designers of the IC24 here in St. Thomas about doing something like this in our factory, but we have such a loyal J/24 following. However, I’m all for repurposing a boat with a cockpit that is age friendly. The missing in junior sailing programs is keelboat experience,” says Johnstone.

“It was very competitive and very difficult. We did reasonably well in light air and dropped back in heavy air. While we stayed in contention the whole time, I personally think we still have to find our groove. After all, I haven’t sailed IC24s for two years,” says Bus.

Perhaps the best sailing story of the day was of how Chris Hutton’s bucket list trip to St. Thomas for his 40th birthday proved to be extra special. The Canadians resident’s wife arranged the trip and Hutton was thrilled to get out on the water as a volunteer on one of the mark boats. Little did he know he’d get to go sailing himself when he jumped in the water to help right a Hobie 16 that got slammed by the headwinds and rollers right outside the harbor.

“I’ve always wanted to be a part of the regatta and little did I know I’d have the opportunity to literally jump right in,” says Hutton.

STIR sailors also enjoyed a once-in-a-lifetime opportunity today when the fleet proudly flew the U.S. Virgin Islands flag and paraded past the waterfront between races in commemoration of the territory’s Transfer Centennial. The U.S. purchased the Virgin Islands from Denmark on March 31, 1917.

New this year, STIR introduces its daily Beach Party, with beach games, water toys and DJ music, between 11 a.m. and 6 p.m on Thursday through Sunday.