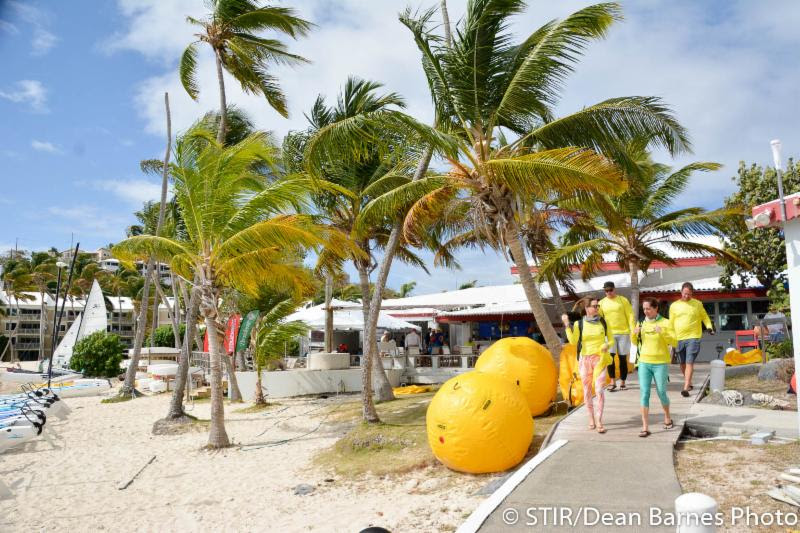 St. Thomas, U.S. Virgin Islands. Clouds and a couple of squalls sent windy curve balls across the courses set for the 50-plus boats racing in the 46th St. Thomas International Regatta (STIR). STIR, long known as the ‘Crown Jewel of Caribbean Yacht Racing’, lived up to its reputation by delivering professionally-set round-the-rocks and round-the-buoy courses, the natural attributes of wind, sun and seas, and first-class competition and camaraderie. However, the big story of the final day of racing was all about the wind.

“We had light air and heavier air, a little big of everything,” says David Tower, tactician aboard St. Thomas’ Peter Corr’s King 40, Blitz, winner of the CSA Spinnaker 1 class. “Today, when the squall blew through in the second race of the day, winds hit over 30 knots. We broached and briefly had a man overboard situation. But, there was no damage, no one was hurt and the team recovered quickly to carry on and finish sixth. Overall, it was a really amazing regatta.”

“That squall today was as windy as I’d seen it the entire regatta. So much so that we decided not to hoist the spinnaker on the first run and we were still flying,” says Bryan, who served as a junior crew several years ago when Bad Girl also won her class. “Our strategy was to have good boat handling, minimize mistakes and stay out of the current. The effect of the current was huge.” 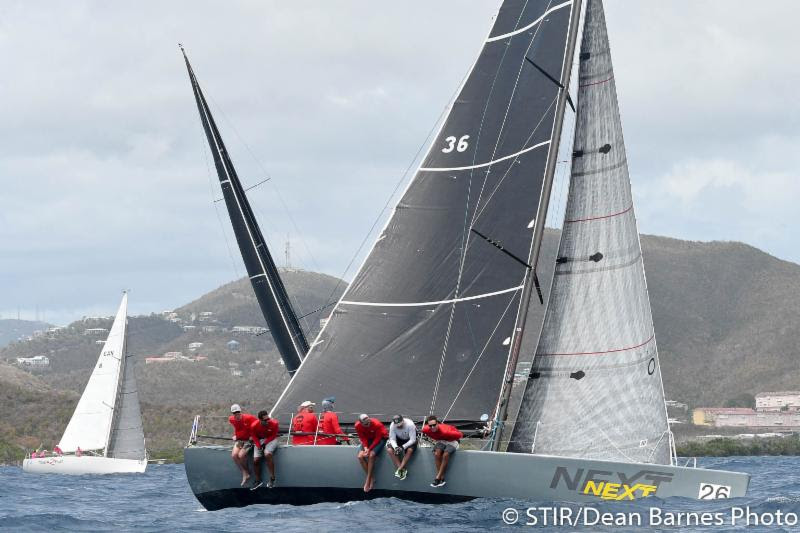 The only boat in the regatta to earn all first place finishes handily won the CSA Non-Spinnaker class. What’s more, Touch2Play, a Reflex 38 owned by Canada’s Rob Butler, was a double winner. That’s because Butler personally donates money to Canadian breast cancer research based on how many times the boat wins a race and a regatta. Thus, with one regatta win and six individual race wins, the contribution was sizable.

“The squall that blew through really shuffled the fleet on that last race,” says Larry Huibers, who helmed. “Spirit of Juno (Ondeck Antigua’s Farr 65) liked the big air, went flying and in 15 minutes had jumped ahead to Two Brothers rocks. Then, the wind died. It hurt Juno the most and chewed about 7 minutes out of their corrected time. That was an advantage for us.” 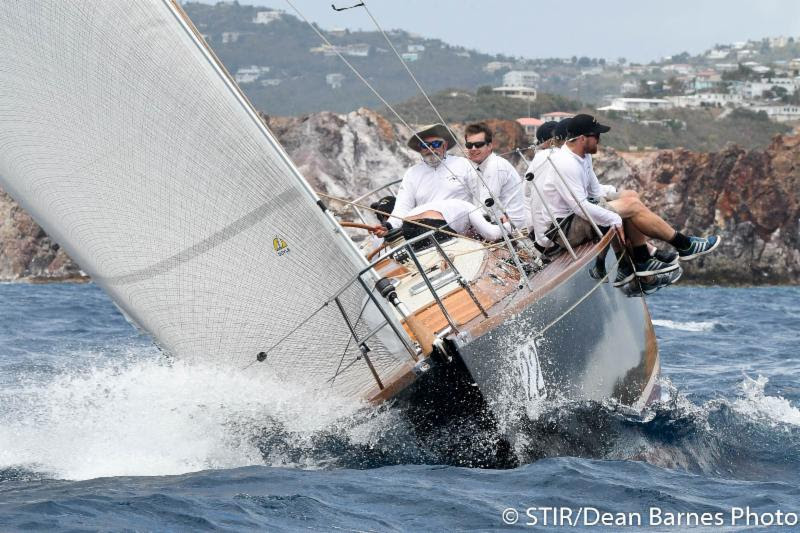 The 18-boat IC24s were likely the most competitive class. In fact, it came down to the last race, on the last day, after 12 races for the winner to be decided. And, that winner was not the boat that led the first two days of racing.

“We started four points behind Sembrador going into today,” says Fraito Lugo, who skippered Orion, along with crew who included his 16-year-old son, Alejandro, and 11-year-old daughter, Alejandra. “Our strategies were starting clear, hitting the left side of the course and starting to the leeward side of Sembrador so we could get control over him with the air. We did that and closed the gap to two points going into the last race. We were prepared if he tried to match race, but he didn’t. He ended up starting late and sailing way to the south. In the end, we won by 7 points.” 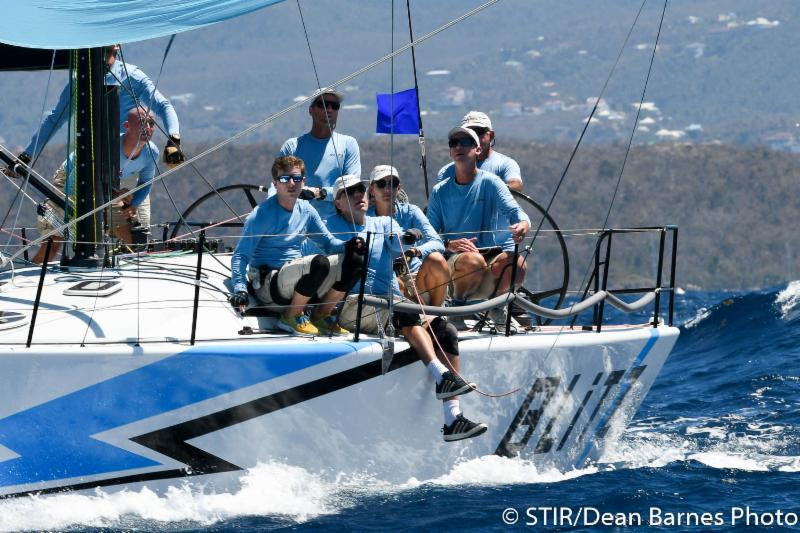 There were two multihull classes in this year’s STIR: Beach Cats and Hobie Waves.

“We started to sail again 2 to 3 weeks ago,” says Tarr. “It was a boat that we were learning and we did flip before the first race on the first day. The second day was windier and we learned to fly our spinnaker. Today was really exciting with over 20 knots. It was all spin (flying the spinnaker) and win.”

“I’ve always liked one-design sailing, first in IC24s, then three years in Hobie 16s and now in the Hobie Waves,” says Bartlett. “The first day, we were pretty spread out as a class. Then today, all the boats started to bunch up together. We hope this class will grow to 12 or more boats for next year.” 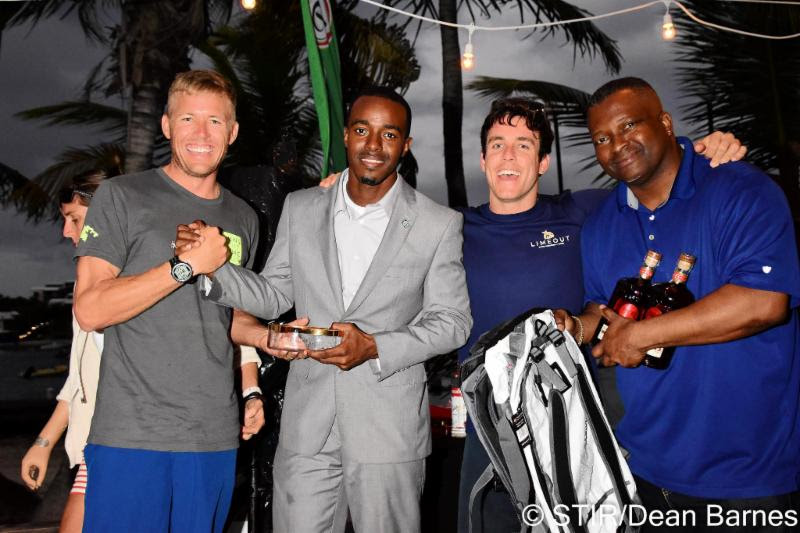 The K3 Company Onboard as Sponsor of St. Thomas International Regatta